skip to main | skip to sidebar

In case you haven't encountered it yet, there's an unpleasant graphic that was emailed around from a staffperson to the Tennessee GOP chair / state senator for Gallatin, Diane Black. One Sherri Goforth was responsible for the distribution.

Nashville is Talking has probably the choices initial responses.

I spoke with Sherri Goforth minutes ago to confirm she sent this email. She confirmed she had sent it and also said she had received a letter of reprimand from her superiors but said she will stay on the job.

“I went on the wrong email and I inadvertently hit the wrong button,” Goforth told NIT. “I’m very sick about it, and it’s one of those things I can’t change or take back.”

Note the total indifference to - or perhaps celebration of - the impropriety of the image inherent in Ms. Goforth's non-apology. Note also the fault she perceives: it wasn't that she sent an offensive, racist image - it was that she sent an offensive, racist image to the wrong distribution list, delivering it to hypersensitive people without a sense of humour who obviously don't get the joke instead of the GOP in-crowd who'd think the image hilarious.

One more thing struck me reading through the noise on this incident. One of the comments at Nashville is Talking included this gem from a commenter calling itself Slimey:

First of all, this is not racism. Racism is the belief that one race is superior over another. This is plain and simple being stupid. Please people, stop calling this racism. Grow up! How many of you laugh during Blazin Saddles? Yet it’s full of racial innuendos and language. I don’t oppose the guy cause he’s black, it’s because he’s a socialist liberal.

First off, the image. "OOH! A SPOOK! Visible only by the whites of its eyes (as opposed to the whites of the skins of the previous 43 MEN in the progression), here to rape your women / steal your stuff / take over your government." NEWSFLASH: that's what racism looks like.

Second, the "socialist liberal" bit. The US has moved quite far to the right on the political scale in global terms, so it all depends on one's position. To a Fascist, everything looks Socialist. 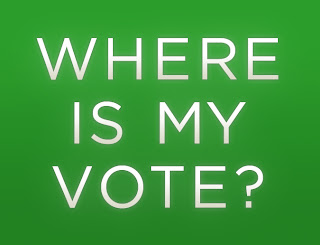 ... with the Moussawi voting bloc in Iran, against what the press that's interested in reporting on the election is calling a coup by Ahmadinejad in the elections there.

Pity about the US MSM. Today's leading story from TBO, for comparison, is here. I'm all for local news as a rule - but leading with a local story today is just irresponsible.

MB at BBWW has links to an interesting theory of the events here: well worth reading.
Posted by Boatboy_SRQ at 9:04 AM No comments:

Yet another shooting spree makes the news: this time in DC, at the Holocaust Museum. It should surprise no-one that the suspected shooter is identified as someone who thinks the Holocaust was a good thing.

ThinkProgress and Washington Monthly both have posts on this latest event. In the latter, Steve Benen states:

There are key differences between violent right-wing radicals and mainstream Americans who happen to be conservative.

I have to take issue with his statement. The mainstream of US conservatism may not be ready to run out and create the kind of mayhem reported of late, but the tone of the rhetoric that has predominated conservative spheres of late has at least been of apologist tones for such incidents if not overtly supportive of such attacks. There has been no-one in the group Benen presumes to exist who has denounced the violence in any believable fashion, called for an end to such assaults on such targets or taken any truly meaningful action to end the cycle. The closest we have heard to date is the sort of "horrifically regrettable necessity" language used by the far right to subliminally defend a "by any means necessary" approach to achieving their goals.

If "mainstream Americans who happen to be conservative" expect to maintain any respectability in the wake of the Tiller murder and today, they need to be more obvious in their distancing themselves - in deed as well as in speech - from the advocates of the recent violence. Without such steps, the acquiescing silence of such individuals will only reinforce the fringe's impression that their actions are condoned, and will encourage more such lunatics to indulge in similar violent episodes.
Posted by Boatboy_SRQ at 5:36 PM No comments:

The Inmates Take Charge Of The Asylum

Musing on this post by Mustang Bobby over at Bark Bark Woof Woof brought me to this realisation.

It's becoming more apparent to me that today's GOP as an organisation is little more than a collection of extreme rightwing crazies with a veneer of passable politics over the mess. It's a bit like finding the "priceless antique table" you bought is really a paper-thin layer of mahogany glued over termite-ridden pine planks.

We all thought that ShrubCo was an aberration, a convenient ignoramus to cover the party machinery underneath. But the more recent actions indicate that the Bush presidency may have been more symptomatic than was previously apparent. The flurry of recent stories of recent GOP stupidity is far more telling than the worst of Shrub's candid comments - it spotlights a wilfully ignorant, cantankerous, consciously obstructive organisation totally unwilling to examine even its own counterproductive methods in its scramble back up to the top. I'm wondering whether the more recent efforts, more reminiscent of scorched-earth combat tactics than any real attempt at governance, is the work of a group with no interest in the national welfare at all or simply that of a group too collectively stupid to care.

No matter what the cause for the misbehaviour of the party, however, it is clear that any attempt to gloss over this bad behaviour doesn't adhere all that well. McCain was persuaded to select perhaps the least competent candidate for running mate not a year ago. The RNC chair, Steele, even with his gaffes presents a more articulate, informed image than the voices drowning him out. And even the voices of relative sanity within the GOP (Powell et al) are sidelined by the noisiest of the loons.

Fifteen years ago, Gingrich and his Congressional allies presented at least an intelligent front to the populace behind which to hatch their schemes. The cracks through to the rotten substance beneath were beginning, but far more difficult to penetrate. Today the equation is nearly reversed: the damage below the surface is readily apparent and popping up in ever more debates, and the attempts to find some respectable platform or spokesperson to make the nutsery seem rational are failing on an increasingly spectacular scale.
Posted by Boatboy_SRQ at 4:45 PM No comments: